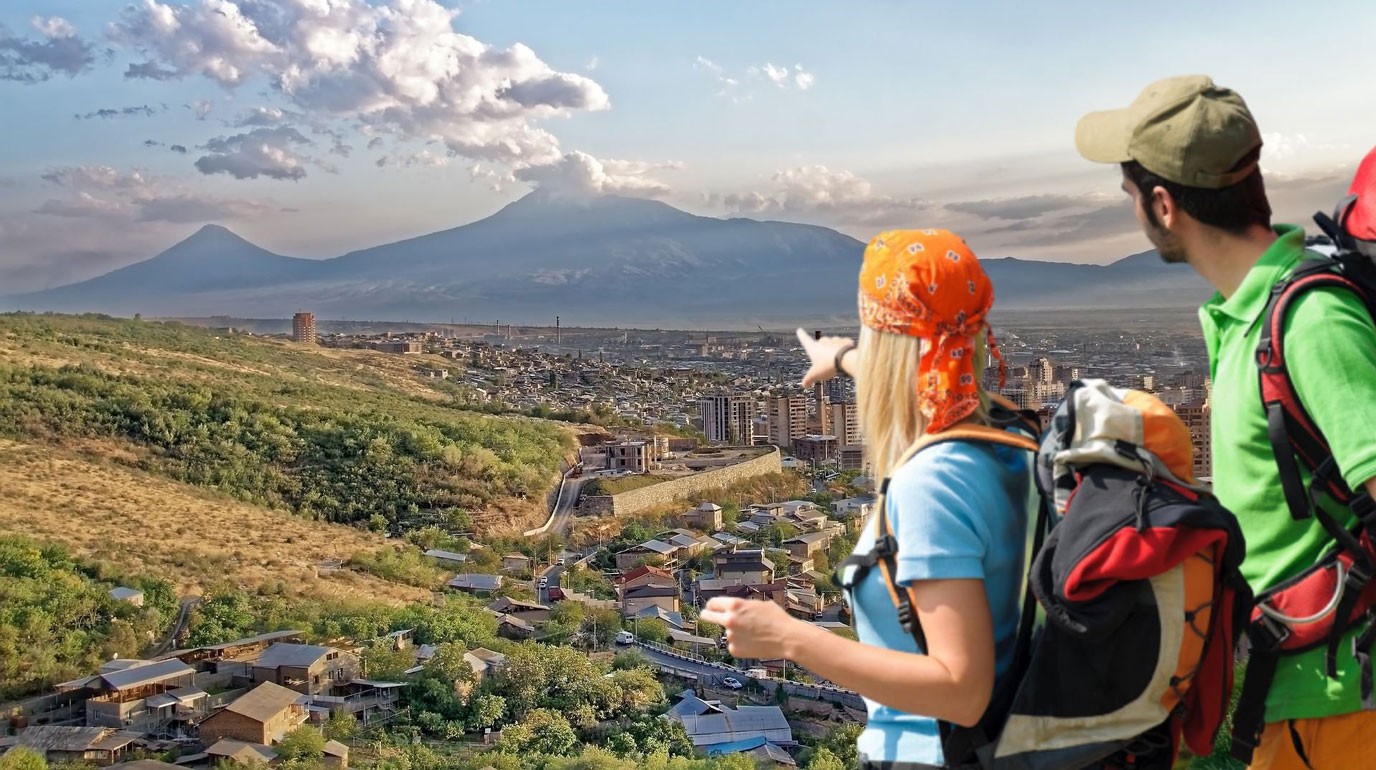 Become a part of our popular “Armenia Guaranteed Departure Tour”, and spend an unforgettable 6 days discovering some of the most exciting sights of Armenia. Start your tour exploring beautiful Yerevan, visit some of the fascinating UNESCO World Heritage Sites, such as the Cathedral of Echmiadzin, the fascinating Geghard monastery complex and the ruins of Zvartnots Temple. Enjoy a panoramic view of Lake Sevan and marvel at the Biblical Mount Ararat from Khor Virap Monastery. And of course, there will be plenty of opportunities to indulge in the delicious Armenian cuisine, superb local wines and the world renowned Armenian brandy! 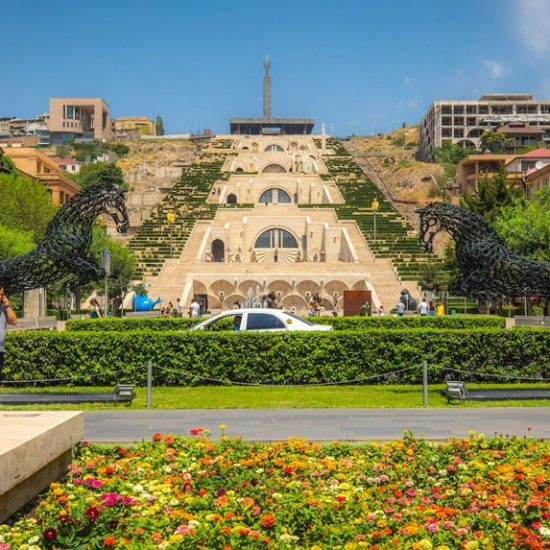 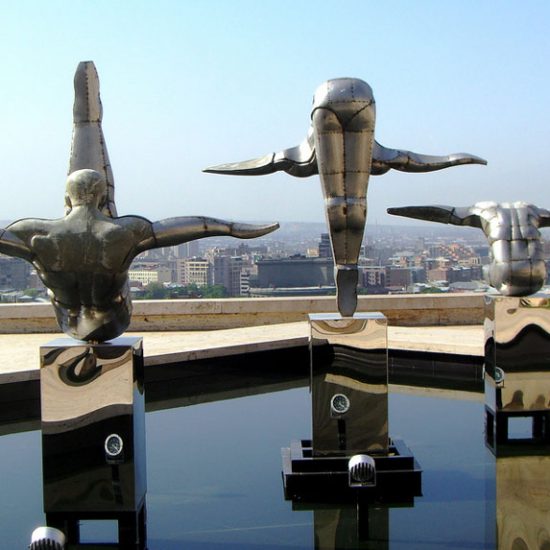 Arrival to Zvartnots International Airport. Meet your Phoenix Tour representative. Transfer to the hotel. Check in. Overnight in Yerevan.
2

Breakfast. Start exploring Yerevan, the Armenia’s capital city and one of the oldest cities in the world. Stop at the Victory Park and Mother Armenia monument to get a spectacular view of the Biblical Mt. Ararat with a panorama of central Yerevan. Visit one of the richest depositories of manuscripts and books in the world, the Matenadaran Institute of Ancient Manuscripts. It’s a great place to get a sense of the Armenian history, culture and connectedness to the world heritage. Take a walking tour of the Cascade complex, with its Sculpture Park and Cafesjian Center for the Arts. The Cascade is a massive white stairway up a hillside in central Yerevan, decorated with green stretches, fountains and waterfalls, that run uphill and crowned with the obelisk of the “Revived Armenia”. Visit the magnificent building of the Opera House, the postmodern Northern Avenue and the city's main Republic Square. Be sure to return to Republic Square after dark to see the "Dancing Fountains", a choreographed water show synched with lights and music (the fountains are on from May until the end of October). Take a tour of the legendary "Ararat" Brandy Factory, featuring degustation of the two types of the world renowned Armenian brandy. The Yerevan Brandy Factory, the only and constant producer of "Ararat" brandies, is one of the key stops for official visits of delegations, cultural figures and visitors from all over the world. Take a tour of an open air “Vernissage” market, where you can buy some gifts, souvenirs, jewelry and other handicrafts made of wood, semi-precious stones, silver and other materials. Stop at the popular farmers market “Gumi Shuka” to buy traditional sweets and dried fruits. It's a fun place to meet vendors and spend time, sampling their foods. The aromas and colors of the local produce will add up to a wonderful and unique experience. Overnight in Yerevan.
3

Breakfast. Drive to Echmiadzin, the heart of Armenian Christianity and the administrative center of the Armenian Apostolic Church. Visit the Echmiadzin Cathedral, one of the oldest Christian churches in the world, built by St. Gregory the Illuminator in 303 AD (UNESCO World Heritage Site). On Sundays you can take part in the colorful service of the Holy Liturgy, which attracts many visitors and pilgrims from all over the world. Drive back to Yerevan. En route to Yerevan visit the ruins of the 7th century Zvartnots Temple (UNESCO World Heritage Site). Originally built to be the tallest church in the world at the time, and to last for 1,000 years (a projected date for the second coming of Christ), the Zvartnots was destroyed by a powerful earthquake in the 9th century. Continue to one of the most beautiful monasteries in Armenia, the 13th century cave monastery of Geghard (UNESCO World Heritage Site). The name of the monastery originates from the spear, which had wounded Jesus at the Crucifixion, allegedly brought to Armenia by Apostle Jude, and currently stored amongst many other relics in the Echmiadzin's Cathedral Museum. Drive to the masterpiece of Hellenistic architecture in Armenia, the pagan temple of the Sun in Garni. Garni Temple was built in the 1st century AD by the Armenian King Trdat with the money he received after visiting the emperor Nero in Rome, and was dedicated to the Sun God Mithra. The temple was destroyed in 1679 in an earthquake, but was reconstructed in Soviet times. Return to Yerevan. Overnight in Yerevan.
4

Breakfast. Drive to Lake Sevan. Sevan is one of the largest high-mountain freshwater lakes in the world. The lake's proximity to Yerevan, combined with cooler summer temperatures, picturesque coastline and historical sights, make it one of the key places to visit in Armenia. Walk up to the 8th century monastery of Sevanavank on Sevan peninsula, one of Armenia's iconic landmarks. Continue to Dilijan, a resort town renowned for its charming nature and some traditional Armenian architecture. Stroll through the cobbled Sharambeyan Street, with its collection of stone and wooden traditional buildings, restaurants, souvenir stalls and workshops. Visit the splendid 12th century Haghartsin Monastery, situated in the picturesque gorge of the upper reaches of Haghartsin River. The monastery was renovated with the generous donation from Sultan bin Muhammad Al-Qasimi, Ruler of Sharjah, U.A.E. Visit the 12th century Goshavank Monastery, a beacon of science and culture of medieval Armenia. Near the entrance to the chapel, you will find one of the most beautiful khachkars (cross-stones) in Armenia - the "Aseghnagorts" (The Needlecarved) khachkar, made in 1291. Return to Yerevan. Overnight in Yerevan.
5

Breakfast. Drive to Khor Virap Monastery, located on the foothills of the Biblical Mount Ararat, where it reveals its breathtaking size and splendor. Khor Virap, located a few hundred meters from the border with Turkey, is one of the most popular tourist destinations in Armenia, primarily because it was here, that the Saint Gregory the Illuminator, the future head of the Armenian Apostolic Church, was imprisoned in a deep dungeon for 13 years. To this day you can visit this dungeon, located under the St. Gevorg Chapel. Continue to the masterpiece of medieval Armenian architecture, the 13th century Noravank Monastery. Set in the spectacular valley of red rocks, the monastery built out of the local stone, blends into the background of the molten red gorge, that contrasts with the stark blue sky. Visit the Areni cave complex, an archeological site, where the oldest leather shoe and oldest winery in the world were found. The shoe is currently on the permanent display in the History Museum of Armenia. Drive to Yeghegnadzor for wine tasting at the local family run “Old Bridge” winery, which is very popular for its delicious wines. You can sample their distinctive 3 types of red wines and 1 type of white wine. Depending on the time of year, the visitors can take part in grape-picking, distillation or bottling process at the vineyards. Return to Yerevan. Overnight in Yerevan.
6

Breakfast. Check out from hotel. Transfer to Zvartnots International Airport. Departure from Yerevan. 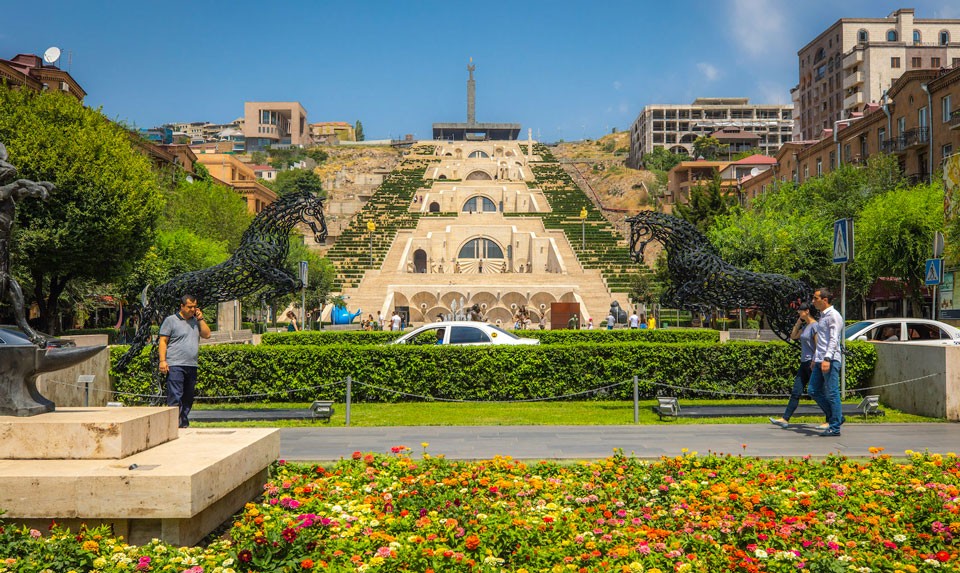 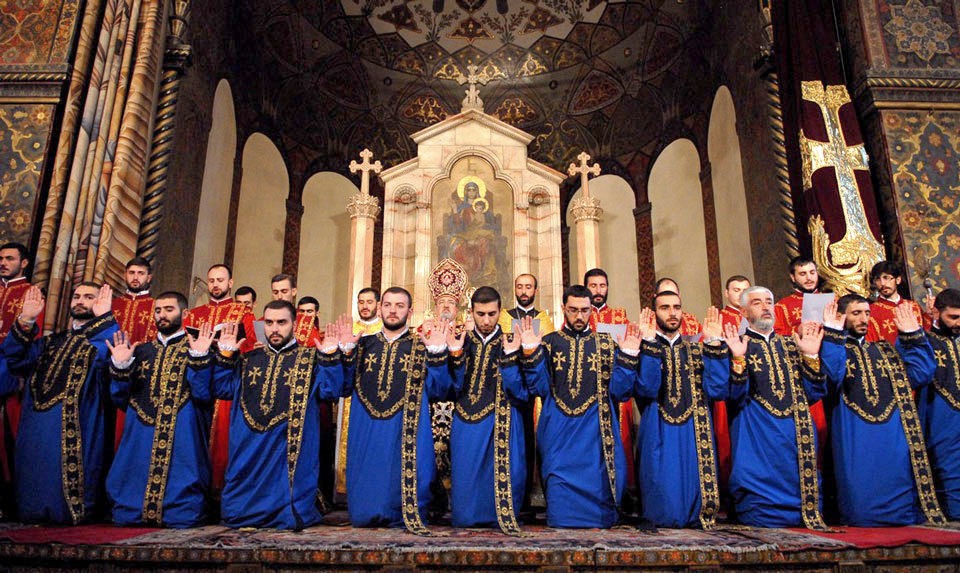 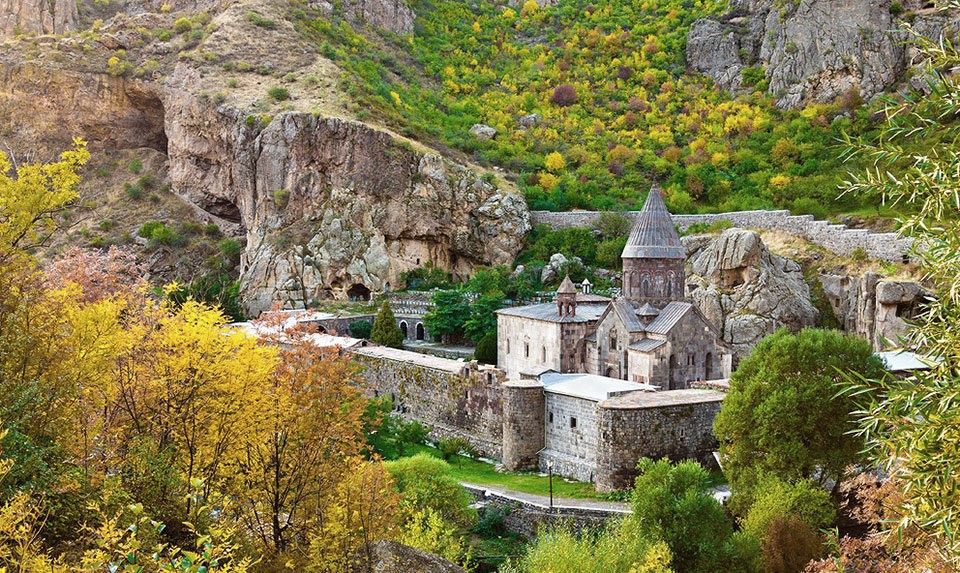 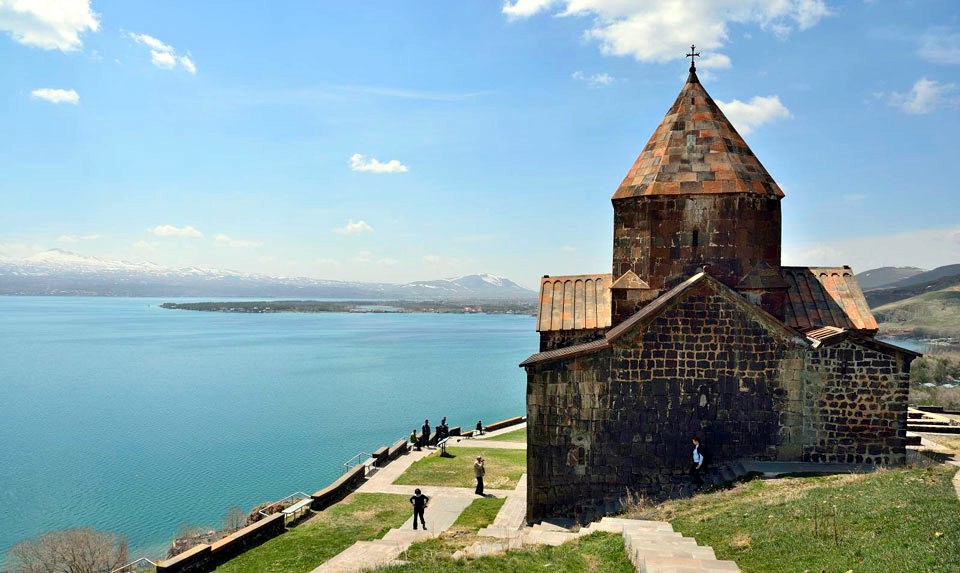 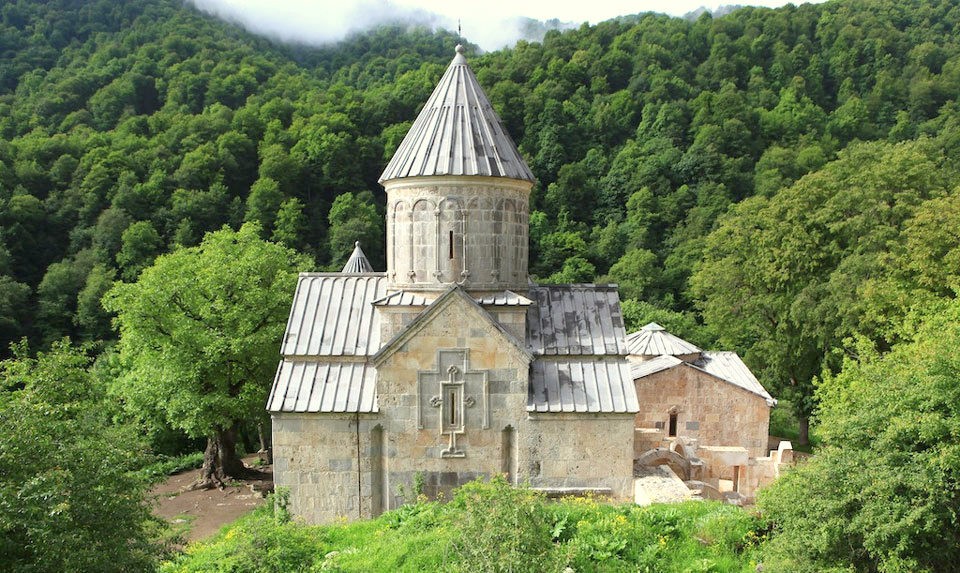 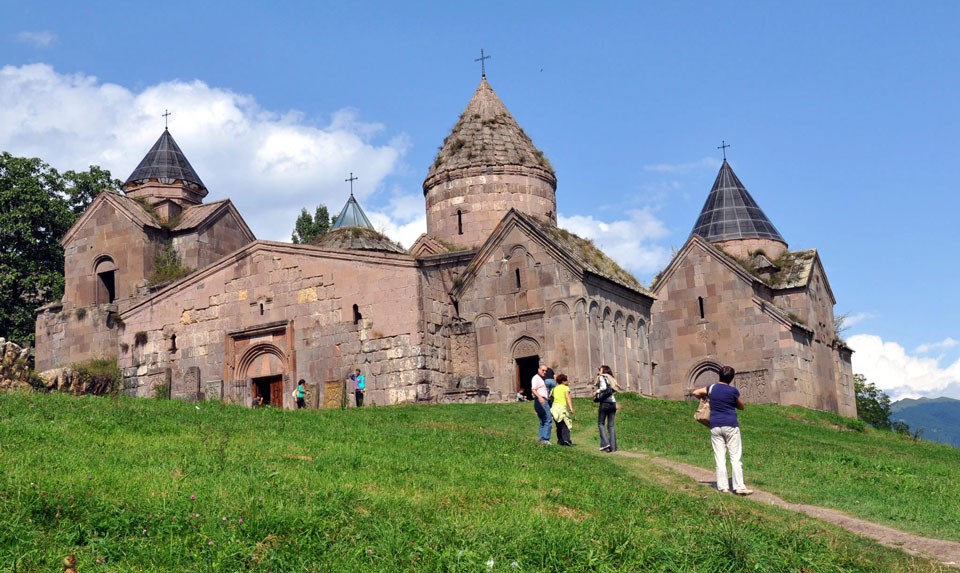